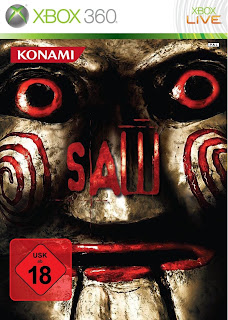 While drafting Torture Porn, I felt compelled to consume as much of the material associated with ”torture porn” as possible. Consequently, I played Saw: The Videogame through to completion. Had it not have been for my research, I would have probably quit after the first hour or so. The plot (such as it is) ties vaguely into the series in some senses, featuring several characters from the films. The game’s lead protagonist is Saw’s Detective Tapp, for example. It is clear from the outset that the game is creating its own version of the Saw-niverse since Tapp is younger and considerably more svelte than Danny Glover. Konami have, however, managed to capture the nuances of his performance: the Tapp that the player helms is every bit as stilted and uncontrolled as Glover was in the original film.
I can live with that. I can also cope with how tame Saw: The Videogame’s violence is, since I was never principally attracted to the Saw franchise by its gore. Less forgivable is that the entire project is such a missed opportunity. Beyond Saw II, the films themselves followed a gaming logic: characters moved through maze-like structures, completing tasks. The violent set-piece traps escalated across each film, giving each entry a level-like structure. The move from film to game should have been natural. However, Konami had other plans. In the game, Tapp roams around, avoiding awkwardly placed trip-wires and dealing with tedious challenges. These include fitting gear-wheels together (shock!), and moving tiles around to create a picture of the Billy puppet (terror!). I remember encountering such puzzles in my childhood. They were dull then. They are not much better in HD using an XBox controller. Ah, the wonders of the digital age (“Wonders, Lisa…or blunders?”). 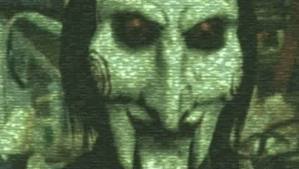 The end-of-level set-pieces are not much better. Most are extended versions of the same gear-placing games encountered throughout, except they feature jutting cut-aways to the entrapped victim (“help me…HURRY!”) that are plainly irritating. More often than not during these moments I ended up shouting ‘shut up!’ or ‘how am I supposed to help you if you keep interrupting me?’ at the screen. Obviously I was nowhere near that reserved, but you get the idea. Frustration and expletives do not foster tension. Moreover, Konami have missed the point. When the film’s protagonists engage with other people in traps, they are faced with moral dilemmas. I don’t remember a Saw film in which the protagonist encounters a trivial connect-the-dot challenge. Prompting the player to make decisions about secondary characters’ fates would have been much more absorbing, especially if those decisions altered Tapp’s path through the game.
Also on the unforgivable scale, accordingly, is the game’s lack of plot. There are some rudiments of a story here, but narrative is mostly avoided so as to not severely disrupt the series’ canon events. Had Konami instead opted for an entirely new set of characters - or even explored one of the series’ existent dead-ends - they may have been able to integrate the game as a peripheral narrative that added to the series’ chronology, maybe even offering flashbacks to the series’ events. The game may have attained much more of a Saw-like atmosphere, or offered some twist reveals to keep the player engaged. This, after all, was one of Saw’s distinctive selling points.
In sum, the game is not as grim, claustrophobic or morally troubling as it should be. Jill Tuck scarier than anything found in this game. A sequel (Saw II: Flesh and Blood) was released less than a year later. I won’t be shelling out for it, even out of professional curiosity. Sadly, the game series had the potential to continue beyond the seven-film run. Even as a cash-in then, Saw: The Videogame is a failure. The tagline asks “Do you want to play a game?” Yes, but not this one.
Posted by Dr Steve Jones at 14:06