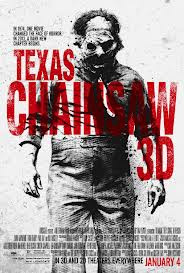 Around 45 minutes into Texas Chainsaw, I had an epiphany of sorts. As a card-carrying defender of the 21st Century Chainsaw films, I really wanted to like the latest entry. However, trying to like this movie was an uphill struggle from the start. At the half-way mark, I became angry: not with the film, but with myself. I realised that it was not my duty to like the film: it is the filmmaker’s duty to create a quality product. From that point, I stopped excusing the evident shortcomings. Since the film is shot for 3D, the aesthetic is light and spacious rather than dark and grimy. From the outset, the plot is unsettled, swinging between degrees of nonsense and laziness. The characters’ motives are hard to decipher because they are (ironically) so two dimensional. The film contains several gory moments, but not enough to sustain the film – had it been an out-and-out gore flick, the lack of coherent plotting would matter less. As it is, the film severely hindered by its uneven pacing, awful script-writing, and awkward editing. Editing-in footage from the original Texas Chainsaw Massacre during the opening credits did not really work: the aesthetic shift is jarring, and the amalgam further muddles Texas Chainsaw’s plot. The sequence in which the lead protagonist Heather/Edith is strung up, gagged and has her shirt ripped open is crass and unnecessary. Even the music playing over the end credits is tonally inappropriate (and moreover, it ranks as one  of the worst songs I have ever heard). The silly post-credits coda is closer to Scary Movie than contemporary slasher. Is Texas Chainsaw a better sequel than Leatherface? Probably, but that is no cause for celebration.
Posted by Dr Steve Jones at 12:37