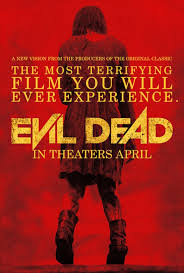 Evil Dead (2013) is a minor triumph. Its brief run-time is suitably efficient. The "intervention" device is refreshing, providing the teens with a legitimate impetus to stay in the cabin and reason to disbelieve Mia in the early stages of her transformation. The cinematography is great, especially in the climactic sequence. It is as gory as hell, but what stands out is the amount of nasty, affecting injuries on display: there is nothing like stabbing someone in the face with a hypodermic needle to induce a sharp intake of breath. Is it 'the most terrifying film' I have ever experienced (as the tagline promised)? No. However, it was an enjoyable and often aesthetically striking film.
There is much hatred for this film floating in the pits of IMDB, most of which emanates from perturbed fanboys who do not seem to have noticed that: (a) "remake" is just a way of selling sequels to a broader audience, (b) the original Evil Dead was not as comedic as many seem to think it was (it was just a little hokey and cheap in places), and (c) the aesthetics of horror have altered since the mid-1980s. I like the original as much as the next fanboy, but times change. All the haters whining on about poor acting, unbelievable elements in the story and lack of character development are clearly misremembering the original. Those elements may be present in the remake, but so too was the original: in fact, the original was guilty on these counts to a far greater extent. There is room on my shelf for both movies (but no room in my life for the IMDB hate-brigade).