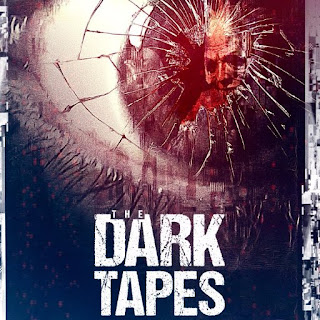 The Dark Tapes is a horror anthology film, and as with any compendium, the segments that comprise the whole are somewhat hit-and-miss. “The Hunters and the Hunted” is the most complete story, and certainly boasts some of the best performances; “Amanda’s Revenge” has a neat structure that initially misdirects the viewer in a highly effective way; “Cam Girls” is the weakest section, featuring some unconvincing acting and the least satisfying plot overall. Nevertheless, each section is efficient, which will surely please viewers who are bored by the protracted establishing sequences that bog down so many full-length found-footage movies. The Dark Tapes has been edited with care, giving enough information to guide the viewer, but refraining from bloating the script with needless exposition. My main problem with the film is that the stories include various plot holes and logical inconsistencies (which I cannot explain here without spoiling each segment), which detracts from the realism that found-footage relies upon. Still, the film is ambitious, and although the wrap-around story does not connect the others together in a literal fashion, it does offer a set of conceptual, thematic links that are intriguing. The opening declaration that ‘humanity is getting closer to the truth’ frames the film’s events as if they are genuine, or at least as if the footage reveals some kind of authenticity. Yet, the film also wears its artifice on its sleeve, flagging that its apparent veracity is entirely fabricated. In that sense, it could be argued that the logical inconsistencies buried within the individual stories enhance the film’s dualistic approach to found-footage. On one hand, The Dark Tapes typifies the found-footage subgenre, replicating the visual tropes – such as ‘digital glitches’ – that have become synonymous with such movies (even though these glitches are unrealistic, inasmuch as they are incredibly rare outside of the subgenre). The film also recalls established found-footage touchstones, including overt nods to V/H/S (in terms of its multiple story structure), and echoing Paranormal Activity in the segment “The Hunters and the Hunted”. However, not only is that parallel to Paranormal Activity undercut in the story itself (I will not say any more so as not to spoil), but it is notable that the makers of The Dark Tapes are just as comfortable citing other horror influences, including Poltergeist (in the “The Hunters and the Hunted”), and even A Nightmare on Elm Street (in the segment “Amanda’s Revenge” via the refrain ‘Don’t fall asleep’). These references root the movie in a broader canon of horror history that extends beyond the recent trend for found-footage indie-flicks. In sum, although The Dark Tapes has its flaws, it is an intriguing film that seeks to rise above the crowd, and I would much rather watch an imperfect movie that attempts to do something interesting than a technically exquisite but banal one.
Posted by Dr Steve Jones at 04:21