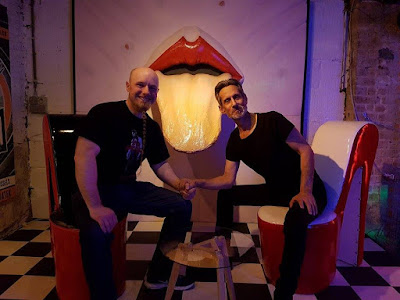 I have just returned from Offscreen (Brussels) where I had the opportunity to speak with Stephen Sayadian about his career in film-making (Cafe Flesh, Dr Caligari, Nightdreams) and as Art Director for Hustler.


During the Q&A/Masterclass session with Stephen, I got the opportunity to ask him a question that I have been wondering about since 2004 (when I was researching about HIV, sex, and horror fiction in the early stages of my PhD...which ended up having nothing to do with HIV). Cafe Flesh is based within a post-apocalyptic landscape where half of the populace becomes deathly ill if they engage in sex. Given that the movie was shot in 1981/released in 1982, and (what would eventually become known as) AIDS was first clinically observed in 1981, I have always wondered whether Cafe Flesh was an immediate response to the medical context, or whether the film's language of 'sex positives', 'sex negatives', and sickness was coincidental. For anyone who is curious, Stephen confirmed that the former is the case. It was also interesting to hear Stephen refer to Cafe Flesh as 'anti-erotic'; I have always described it as one of the least titillating "porn" films I have seen (which is one of the reasons I was initially intrigued by it). Stephen told me that the film was originally supposed to depict a castration and was meant to end with Max being hanged. Those additions would have further augmented the horror embedded in the film's tone.
I was also unaware that many of the images from Hustler magazine (particularly the parody adverts), which I have used countless times in lectures about porn, were created by Stephen. Given how thematically dark some of that material is, I am now considering writing a piece about the coalescence of sex and horror in his work.
The Offscreen festival continues until 26th March. For more information, please visit http://www.offscreen.be/en/offscreen-film-festival-2017
Posted by Dr Steve Jones at 05:05