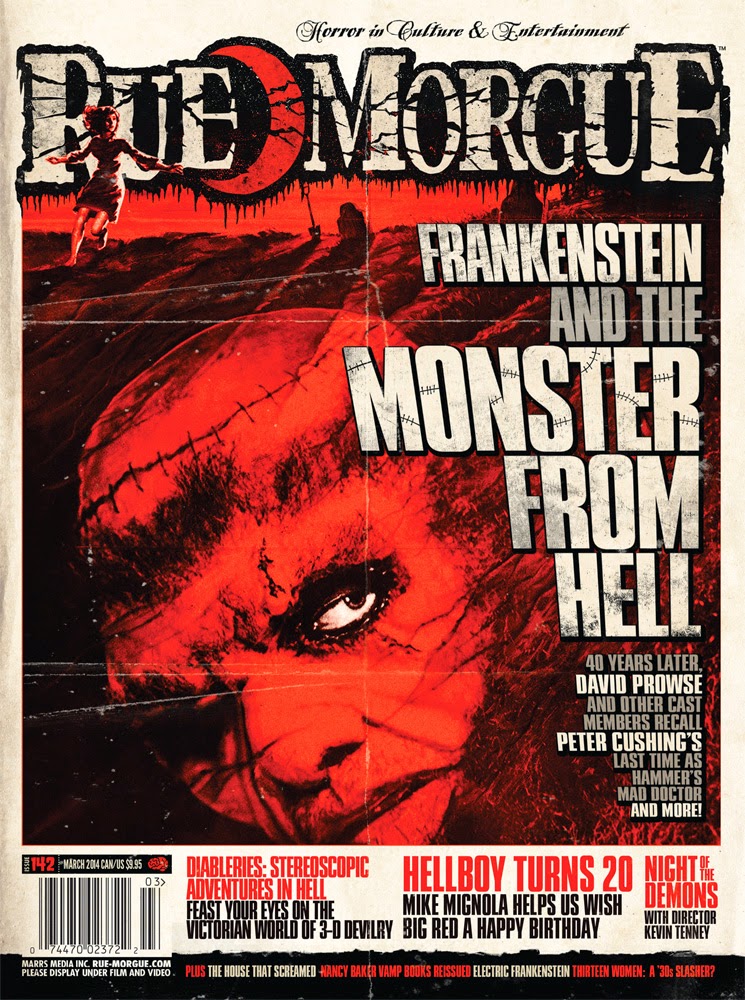 Check out the full review in this month's Rue Morgue.

Vanessa Veracruz has spoken out on the Twistys 'Treat of the Year' debacle (thanks to mikesouth.com)
"It is with deep regret that I inform my fans and followers that we have resorted to openly denouncing Twistys business practices but in my opinion, as well as that of hundreds of Twistys followers and members, the handling the 2014 Treat of The Year has been nothing less than appalling. Twisty’s has been a staple in the adult glamour market for a long time and has done so through a reputation of fairness and professionalism, recently management’s decision to not only release the results of the latest Treat of The Year vote nearly 4 weeks after voting had stopped, but also to decide to ignore their member’s actual vote and choose the runner up themselves has been confirmed by numerous forum posts and the recent resignation of their production manager.
The selection, rather than the honest vote, of the latest Treat of the Year runner up is not only an insult to my professionalism as a model but is also a drastic departure in the business practices of a once reputable company. For many mainstream consumers, porn sites may appear to be all created equal however there is a drastic difference between the quality and respect that studios deserve. Prior to the takeover by Manwin and subsequently the unexpected transition to MindGeek, the Twisty’s site and staff had an enormous amount of respect from their models and members alike. It is shameful that the transition to new management has put such incompetence in place that the company has sacrificed the very ethics that made it a powerhouse in the world of adult glamour. It is now well known and verified thru the interaction of senior staff at Twisty’s as well as some of their leading models, the election of their runner up favored what they assumed to be a better business decision but failed to think of the ramifications to their reputation. It’s shameful to begin with that such a large company would cheat myself out of a hard earned member decided award, but even more discouraging is the way in which MindGeek and Twistys have handled the outcry voiced by myself and other models such as Brett Rossi, Emily Addison, Bree Daniels, Sabrina Marie, as well as many more. Their response to our voices as well as that of the members who have rallied behind me, has been to ban accounts and shut down the forums. Rather than admitting fault or at least addressing an issue which they were clearly wrong on, MindGeek took the stance to block out its lifeblood, its members and models. I strongly believe we have seen the first public display of mismanagement and potentially the downfall of one the industry’s staple studios. In an eerie parallel to the 2008 banking collapse where senior management thought their institutions “too big to fail” we again see the ugly head of big business permeating another aspect of our everyday lives. This time MindGeek should take note, your models bring the traffic and your traffic pays the bills. They obviously care more about the traffic than their members.
Publically I am requesting that if you have a Twistys membership please cancel it today and support ethical business behavior and our boycott on Twistys. Despite whether you support me personally JI believe that this cascade of events has shown the dishonestly of Twistys and should not go unnoticed. As an incentive to for you to cancel your Twistys membership I am offering the first 100 people to send proof of their cancellations to FUCKTWISTYS@ClubVanessaVeracruz.coma free signed copy of my Latin Lust DVD (ClubVanessaVeracruz.com/latinlust) and the next 500 people a signed 11”x17” Poster of myself. Support our boycott today and stand up for better business!"

What do we learn from seeing how impulses travel though the brain? Probably something useful if you are a neuroscientist. The rest of us can make do with not learning a great deal, but being impressed with how damn pretty the brain looks/how beautiful thought is.
Posted by Dr Steve Jones at 02:47 No comments:

What do colours sound like? Well, it depends what technology you use. This is a mind-boggling experiment in phenomenology:

Excerpt from Hack My Hearing (BBC Discovery/Frank Swain 11/3/14)
Please support the creators by listening to the full programme, which is currently available to stream here: www.bbc.co.uk/i/p01t5q2q/
and is well worth checking out.
Also, here is a link to Action on Hearing Loss (which is mentioned in the show): www.actiononhearingloss.org.uk/

My up-coming zombie anthology received a brief mention in a short article on zombies and academia in the Wall Street Journal. Check out Erica Phillips' article here.
Shaka McGlotten (my co-editor) has submitted the completed manuscript for Necrosexuality to McFarland, so I'm hoping it will be out later this year. I'll post updates here as they come in.
Posted by Dr Steve Jones at 23:45 2 comments: