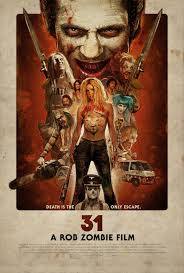 I understand why so many critics are disappointed by 31, but it is nowhere near as bad is being suggested. The movie is ultimately a decently made torture porn flick (NB: if you read that sentence as an insult, then allow me to direct you here). The main issue with 31 is that the plot is so paper-thin that the movie feels hollow, even flat. However, let’s put this in perspective. 31 is still more entertaining than most other movies that share the same plot ($la$hers [2001], for instance), and it is more coherent than Zombie’s debut House of 1000 Corpses, or even Halloween II. Thin plot might be a sensible route for Zombie given that storytelling is not his forte. As I have come to expect from Zombie, the direction is inconsistent, shifting between strong compositions and floundering disarray. The core problem here is shaky cam – a.k.a. the trend that refuses to die, a.k.a. the worst thing to happen to filmmaking – which amplifies the impression that the film is a wild, unfocused jumble of “stuff”. Obviously Zombie should not be singled out here, since so many directors seem enamoured with the technique, even if it means refusing to show the audience what is happening and hampering immersion. Nevertheless, it is frustrating to know that Zombie is capable of much better, as Lords of Salem demonstrates. It is also telling that by far the strongest sequence in 31 is the opening monologue, which is almost entirely constituted by a single static extreme close-up. Richard Brake steals the movie, both because it is a great performance and also because Doom-Head is the film’s only real character. The casting, it should be noted, is one of the movie’s highlights. It was particularly refreshing to see actors such as Lawrence Hilton-Jacobs and Meg Foster in roles that would typically be occupied by “pretty” 19 year-olds. In sum, this is a step backwards for Zombie after Lords of Salem, but unevenness is the hallmark of his oeuvre. If he stays true to form, his next movie will be a treat.
Posted by Dr Steve Jones at 10:10 3 comments:


This one has me intrigued. Sadhuram 2 is clearly a Saw knock-off, so it is either really late to the party, or it is ahead of the curve (or at least ahead of Saw VIII.
However, it claims to be "India's first Philanthropical Thriller" - I'm not at all sure what that means - and also "the first ever movie in India where the second part is getting released before the first part". As someone with a pet interest in horror sequels, that marketing strategy has hooked me.
I'll definitely be checking this out, if only to find out how they will combine Saw's misanthropy with a "philanthropic" agenda.
Posted by Dr Steve Jones at 14:29 No comments: