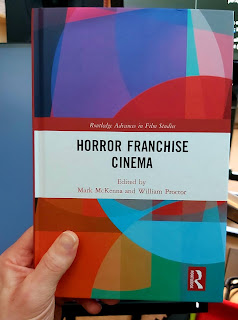 I have a chapter on the Elm Street series in the new Routledge edited collection Horror Franchise Cinema (ed. Mark McKenna and William Proctor)  - the title is “If Nancy Doesn’t Wake Up Screaming: The Elm Street Series as Recurring Nightmare”.

Long-running horror series are reputed to yield diminishing returns (both in terms of profit and quality). At first glance, the A Nightmare on Elm Street series appears to fit that established pattern. For instance, lead antagonist Freddy supposedly ‘deteriorates’ from sinister, backlit child molester to comic-book ‘Las Vegas lounge’ stand-up act by the end of the 1980s (Schoell and Spencer 1992, 116). However, interviews from the period indicate that comedy was a central component from the outset of the series; it is not, as has been often suggested, that the series’ horror was diluted by the introduction of humour in later sequels. Such misremembrances are entrenched by the writers’, directors’ and actors’ retrospective reflections on Elm Street, which colour how the series is understood more broadly.

This chapter will focus on one of the most common misremembrances embedded into Elm Street’s lore; that the series began with hard rules about the relationship between dream and reality, which became looser (to the point of incoherence) as the series progressed. As close textual analysis and examination of archival interviews will demonstrate, the series’ “rules” were never as clearly established as creator Wes Craven intended. Moreover, rather than complaining that the continuing story did not hold together—indeed, Craven dismissed parts 2-6 of the series on these grounds—I argue that the series ought to be taken on its own terms. The individual films may vary in aesthetic and quality for various industrial reasons, but they are nevertheless chapters in a continuing narrative, and ought to be understood as such. Given that the diegesis is based on shared experiences—secrets held by Springwood’s parents, nightmares and abilities shared by the teens—it is reductive to understand the Elm Street films as anything other than an imbricated whole. As such, this chapter will demonstrate that the series’ narrative is best understood as a recurring nightmare. Its logic is dreamlike, being constituted by events, characters and motifs that are echoed across the series. Thus, this chapter contends that to dismiss the Elm Street sequels as a product of diminishing returns is to overlook the series’ narrative richness. More broadly, this chapter makes a case for understanding sequels as valuable parts of a whole, rather than dismissing them as inferior copies of the original.

If you would like to read it, it is available here

The collection is available here. It features many excellent chapters on horror, including one by my colleague Kate Egan. Northumbria Uni's horror research is being represented in back-to-back chapters in this collection! 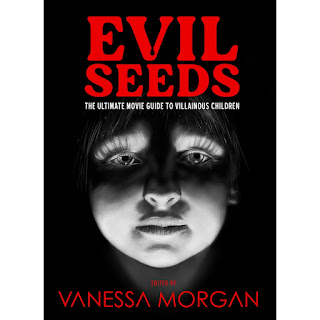 ...although I wrote them before becoming a father (not as a reaction to my daughter's arrival) 😂

I recently had the pleasure of delivering a Keynote talk about my current book project - The Metamodern Slasher Film - at the Slasher Studies Summer Camp conference (on Friday the 13th August, no less!)

Here is a recording of the keynote:

I also participated in a roundtable discussion about Slasher Studies alongside Wickham Clayton, Joan Hawkins and Murray Leeder. Here is a link to that discussion:
https://youtu.be/rZ25xWFDq9E?t=3693
My thanks to the organisers - Wickham Clayton and Daniel Sheppard  - for inviting me to contribute to this event
Posted by Dr Steve Jones at 02:01 No comments: 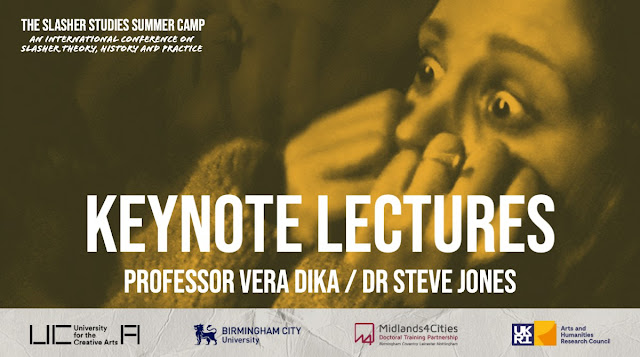 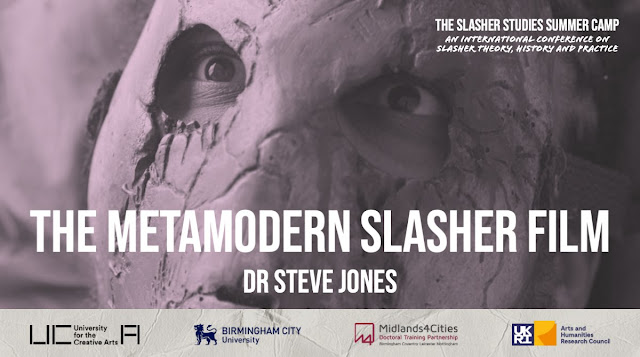 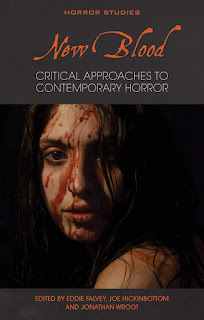