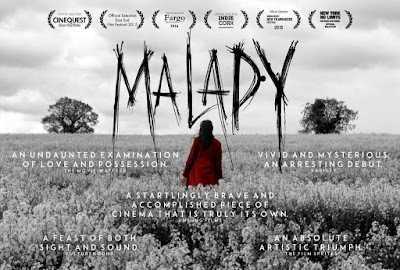 Malady is a tricky film to review for several reasons. First, it is a slow burning mystery film, and so revealing too much about the plot – which is fairly sparse in terms of story “events” – would ruin the movie. Second, Malady is intentionally enigmatic. It is built on concepts and fleeting impressions more than hard plot-points. The characters project their desires onto substitutes (such as a ring, a lock of hair, or even another person), and so those symbols carry much of Malady’s meaning. To pin-down what happens in Malady is akin to describing a dream; a description would sound vague and it would do no justice to the richness of experiencing it first-hand.
There is little dialogue particularly in the first third of Malady (my favourite part of the film), precisely because words fail to capture experiences such as grief and desire. Throughout, back-story events and motivations are hinted at without being laid out. The narrative is comprised of echoes such as, for instance, an equivalence between lead protagonists Holly and Matthew’s situations vis-à-vis devotion to their ailing mothers. There are dozens of such strands woven into Malady, but they are indirect and therefore somewhat indistinct. This is not a complaint; the movie has been edited into its leanest possible form (both at script and post-production stages), and that  only benefits the final product. The viewer is left with gaps to fill, but that technique develops the atmosphere and focuses one’s attention. The filmmakers and cast provide sufficient detail so that one can always at least sense what had happened prior to the narrative present. Malady seeks to form a pact with its audience based on trust; the viewer’s trust in the filmmakers’ judgement, and the filmmakers’ trust in the viewer’s intelligence. That pact parallels the film’s themes insofar as Holly’s wholesale commitment to Matthew – her trust in someone she hardly knows – leads her (and the audience) into dark territory.
I presume the film was shot on a micro-budget; the credits make reference to crowd-funding, and a small crew were responsible for the production. However, the film itself bears little evidence of its financial origins. I sincerely doubt that a higher budget would have enhanced the content. The movie boasts an assured aesthetic that matches its patient pace. There is a maturity and confidence to the proceedings that are vital to selling what could have easily come off as pretentious, boring or frustrating in lesser hands. The production undoubtedly benefitted from writer/director/producer/editor (…and so forth) Jack James’s evident control over the project at all levels. It feels like an intimate project from the ground up, and the cast give appropriately assured performances as a result.
I have no doubt that Malady will struggle commercially because it does not neatly fit into a genre category. Its pacing (and some of its more controversial themes) will undoubtedly alienate some viewers. However, those who do discover this gem will be rewarded with an involving, impressive and haunting feature that certainly ranks among the best indie movies in recent memory, and which holds its own against its higher-budget brethren. 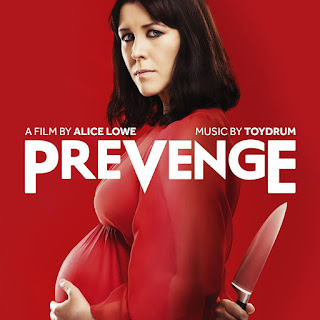 Episode 3 of the Horror Lab podcast is now available


In this episode we discuss women in horror with our in-studio guest Dr Alison Peirse (University of York) and our interview guest Kat Ellinger (Editor-in-Chief of Diabolique magazine). We also consider the film Prevenge (Alice Lowe, 2016).