Update: target reached! Still 10 hours to go if you want to get in on this

34 hours to go, and the target has nearly been met for Scream, Queen! Mark Patton's documentary about A Nightmare on Elm Street 2. Less than $4000 left to raise - anyone else willing to show this doc some love?

"This is not your typical Nightmare On Elm Street documentary. Whether you're a horror fan or a gay advocate, Scream, Queen! has something to offer to everyone. We delve into a deeper subject of A Nightmare on Elm Street 2 that has been at the forefront for years, yet no one has fully explored. This is a story not just about Mark Patton, the star of A Nightmare On Elm Street 2, but about Hollywood's gay subculture in the 1980s. For months we have been following Mark Patton around getting intimate accounts of how the backlash of NOES2 has deeply affected his life. From its release in 1985, fans and critics have raised an eyebrow at the not-so-subtle hints of Jesse Walsh's sexuality. Did this create the whirlwind of questions that set the film so far apart from all the others in its series? Village Voice publication was the first to officially comment on the film's gay subtext, releasing a landslide of both good and bad commentary from fans and critics worldwide. In 1985 being gay in Hollywood could cost you your career. Now 30 years later, Scream, Queen! is asking why?"

https://www.kickstarter.com/projects/1832830591/scream-queen-my-nightmare-on-elm-street/
Posted by Dr Steve Jones at 00:40 No comments: 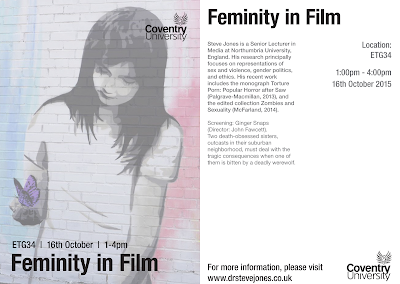 On Friday, I gave a talk entitled "Women in Horror: Moving Beyond Misogyny" at Coventry University as part of their Femininity in Film series. It was great to meet the staff and students there. Thanks to everyone who came - the turn-out was fantastic.
Posted by Dr Steve Jones at 02:37 No comments:


"As an award-winning lawyer I am an expert at advising clients accused of sexual offences. I also provide a unique advisory service for clients in the arts and media; the adult industry; as well as offering pro bono advice for campaigns, organisations and activists. I have dedicated my career to challenging the legal framework by which sexual morality is constrained through my activism, campaigning, litigation and advocacy.

Please help Me to help You by becoming my Patron.

https://www.patreon.com/MylesJackman?ty=h
Posted by Dr Steve Jones at 01:40 No comments: 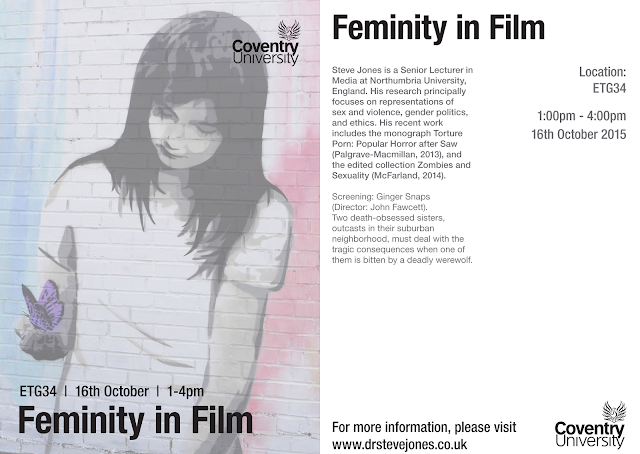