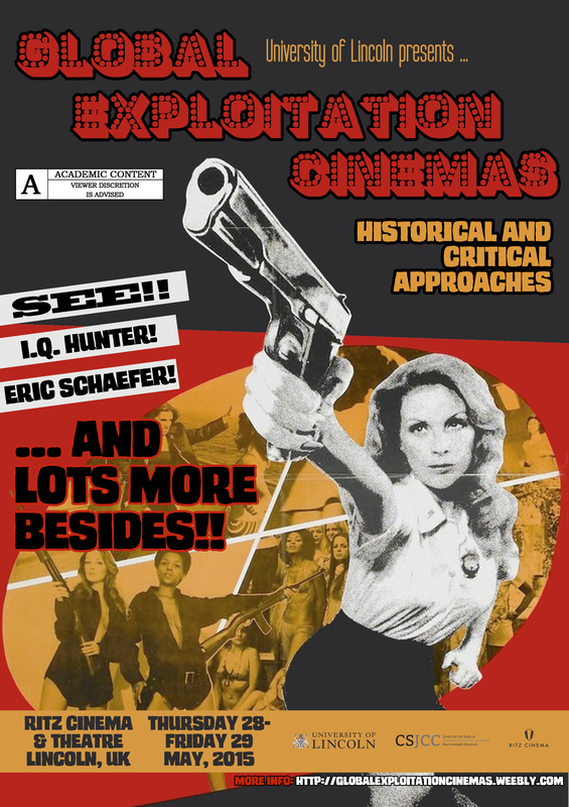 I've just arrived back after attending the 2015 Global Exploitation Cinemas conference in Lincoln where I presented a paper (title and abstract below). The venue (The Ritz cinema) was fantastic, and the event ran really smoothly. It was great to catch up with colleagues and to meet some new faces. Hopefully the conference will run again next year.

My paper was based on a chapter in the forthcoming collection Grindhouse: Cultural Exchange on 42nd Street and Beyond (eds. Austin Fisher and Johnny Walker, 2016)

Grindigital: The Ghost of Grindhouse Present
Despite the closure of virtually all original grindhouse cinemas, the 21st Century is hardly a ‘post-grindhouse’ era. As a concept, ‘grindhouse’ lives on, transcending the American cultural context out of which the term arose. The films once shown in grindhouses continue to find new audiences and ‘Grindhouse’ movies’ formal properties and themes have been emulated in contemporary films. However, tensions arise out of the transference from 42nd Street’s flea-pit cinemas to the consumption of ‘grindhouse’ – movies, associated paraphernalia, and literature about the era in which grindhouse cinemas flourished – in the home. As this paper will contend, the prevailing conceptualization of ‘grindhouse’ as a discourse about the past is problematized by the present confluence of ‘grindhouse films’ and ‘home-cinema’ technology (mainly oriented around DVD). In this context of a widening gap between the grindhouse context (‘past’) and the DVD/home-viewing context (present), fans and filmmakers have increasingly sought to preserve the ‘grindhouse.’ However, the world of the grindhouse is fast slipping away, becoming little more than a blurry set of tall-tales and faded phenomenal experiences. The prevailing reputation of ‘grindhouse’ as a discourse about the past omits the extent to which our understanding of grindhouse is subject to present-bias. The continuing usefulness of grindhouse-qua-concept requires that we pay more heed to the contemporary contexts in which ‘grindhouse films’ are consumed.
Posted by Dr Steve Jones at 03:07