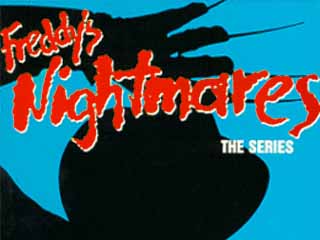 It is easy to forget just how phenomenal New Line’s Nightmare franchise was at the peak of its economic success. Freddy’s Nightmares is certainly representative of that boom: it is an extended excuse to cameo Freddy that rivals Robert Englund’s in-character turn presenting MTV as a feat of shameless franchise-promotion.

Many have written off Freddy’s Nightmares, and not only on the grounds that it is something of a cash-in. The series’ awkward attempts at comedy, super low budget, and fleeting violence make for often uncomfortable, sometimes tedious viewing across its 40+ episodes. As the writers, directors and cast have commonly admitted, the series’ quality nose-dived as it progressed, and the series failed to live up to the expectations of all involved.

Viewers too would be forgiven for being disappointed with the series’ relative Freddy-lessness. Aside from a couple of episodes that involve Freddy directly, Kruger usually just pops up in between story segments to impart a cringe-worthy pun before the ad break. The series’ episodes are divorced from one another, usually being based around stories of poetic justice or fated misfortune. As such, Freddy’s Nightmares follows a path already well trodden by Alfred Hitchcock Presents (1955-1962), The Twilight Zone (1959-64),Tales from the Darkside (1983-88), and subsequently by Tales from the Crypt (1989-1996), each of which arguably out-shine Kruger and co. Beyond the first handful of episodes it was apparent to audience and makers alike that Freddy’s Nightmares was the ‘bastard son of a hundred’ hopes.

These limitations notwithstanding, there is a certain amount of freedom that stems from the realisation that a product is maligned by audience and producers alike (i.e. that no one gives a s**t). Each Freddy’s Nightmares vignette follows a standard enough plot, yet the episodes customarily come-off as bizarre because the two parts of each episode are tangentially related. Some of the characters carry over from the first to the second story, although the source of horror is rarely consistent. Herein lies the most intriguing aspect of Freddy’s Nightmares, and one that frequently salvages the series.

For example, the first half of “Rebel Without a Car” is focused on Alex, a high-school drop-out who dreams of leaving Springwood. Finding and fixing up an abandoned car, Alex becomes a rebel and plans to leave town, with or without his college-bound girlfriend Connie. Eventually it is revealed that the majority of these events were ‘just a dream’: Alex (and his dreams) were crushed by the car as he was working on it. The episode’s first half closes with Alex eternally driving, trying to escape Springwood. The episode’s second half follows Connie after Alex’s death as she goes to college. Connie is motivated by her desire to belong to a sorority. Initially rejected by the snobs who occupy her sorority of choice, Connie is eventually and begrudgingly taken in by the hideous sorority girls who abuse her. To give a flavour of what follows, their hazing includes goading Connie into prostitution. Connie then flips out and kills them all. The irony is that because she survives, she will never be “one of them” (i.e. dead).

In one sense, there is no need to link the two stories. Each episode of Freddy’s Nightmares is its own beast, so dividing the halves would be perfectly acceptable. Yet interlinking changes the second story: her trauma over Alex’s death provides motivation that explains Connie’s breakdown, even if it is not explicitly mentioned in the script. There are a couple of dialogic references to Alex and what Connie has ‘been through’ in the second half, but mainly the connection is tonal. The running story is related to Connie (Alex’s death sets up her character trajectory), so although one might assume that the episode-title (“Rebel Without a Car”) refers to Alex because he is the show’s point-of-entry, it more accurately refers to Connie. She, after all, is the one that genuinely rebels and is ’without a car’. The set-up is geared in one direction, and the events swerve in another, which is unsettling. Isolated from each other, the stories would be standard fare. As a chain, they become unpredictable.

Inconsistency and explosiveness are calling-cards of the Freddy’s Nightmare’s formula. That advert breaks stunt the narrative flow as soon as any action begins only amplifies the disturbing arc, giving each episode a jagged quality. Every minor movement that contributes to the story is quickly extinguished by an ad-break intersection. The scripts are loose, the acting is stilted, and the effects and sets look artificial. Everything in the diegesis attains an unreal quality, and the 45 minute juttering narratives verge on the incomprehensible. Where it looks like an episode makes sense, it is mostly because its cliches provide some sense of predictability. The form, however, constantly undermines that impression. There is an overarching structure that provides meaning, but it does not quite belong to the events depicted. Logical grounding is always slightly out of reach. In short, the byproduct of the series’ rather shoddy production is that the semi-related vignettes become perfect dream narratives.

It is unsurprising that one of the most popular episodes, “Sister’s Keeper”, deviates from the general formula in two key respects: first, it is a Freddy-based episode; second, it follows a continuous 44 minute storyline. In these senses, it is closer to the Elm Street film-canon than the non-Freddy episodes in terms of both content and plot-structure: i.e. it follows two of the Elm Street children having nightmares and finding a way of defending themselves against Freddy.

Yet the comparison with the film series highlights the episode’s shortcomings. The series was famed for its remarkable, elaborate dream-kill set-pieces. Here, the nightmares go a little like this:


…Sheer, unrelenting terror is not the episode’s strong suit. 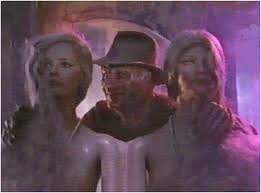 The episode’s strengths stem from what it retains of the usual Freddy’s Nightmares formula, and thus only goes to further exonerate the series on its own merits. “Sister’s Keeper” is based around twin sisters Merit and Lisa, the central idea being that when one is attacked by Freddy, the other is harmed. In the quest to fill out the segments between each ad-break, the twins are set on various mini-arcs, each of which confuse their relationship. In one, the twins swap identities: the popular Lisa spends a school day in Merit’s unstable, bullied shoes and vice versa. In another, their identities collapse: only one twin is present, and their mother denies the existence of the other. Lisa is referred to as Merit, and Merit claims to be Lisa, resulting in Lisa being locked away in an asylum in Merit’s place. Whether this occurs or whether it was a nightmare is ill-explained in the narrative. What is more, it doesn’t really matter which twin is present onscreen beyond that point, because their names have become arbitrary signifiers. They are, as their algebra teacher has it, two balancing halves of an identity equation. The twins need to become one to fight Freddy.

The off-kilter, fluid story-telling suits that tale of identity collapse. By the time the twins begin pulling one another into their respective dreams, “Sister’s Keeper” has made a better case for dream powers than A Nightmare on Elm Street Part 3: Dream Warriors does. By beating the viewer into submission with drifting logic, cul-de-sac dream sequences, and false starts, the idea that Merit and Lisa share an internal psychic bond is about all the viewer has left to cling to in order to make sense of the story. That they can occupy the same dreamspace is about the most explicable of the narrative’s shifts.

Although it does not share Freddy’s Nightmares’ typical two-part structure then, “Sister’s Keeper” does follow a similar logic by placing so much weight on the twins’ bond. They are two halves of a singular story: they look like separate entities, but they are always-already intertwined. Just like Connie and Alex’s stories in “Rebel Without a Car”, it is only when Lisa and Merit are joined that they gain an overall, unexpected coherence. Even when Freddy’s Nightmares appears to be acting as a counter-part to the film franchise, its strengths are to be found in the television series’ unique identity, which is more interesting and unsettling than it may first appear to be.

Moreover then, we can think of the film series and the TV series as two parts of the same continuum. Without the film series, Freddy’s Nightmares’ dream-logic would make little sense: it is ill explained and taken for granted in Freddy’s Nightmares, because 22 minutes is too short a space for a set of characters to unpick the metaphysical complexities of a dream world encroaching on their waking reality. The film series is akin to Connie in “Rebel Without a Car”, or Merit in “Sister’s Keeper” then: it is the major driving force, the surviving protagonist in the story of the Nightmare on Elm Street phenomenon. Although Alex, Lisa, and Freddy’s Nightmares all died before their counterparts, that is not to say that their contribution to the others’ trajectory is not significant.
Posted by Dr Steve Jones at 15:07