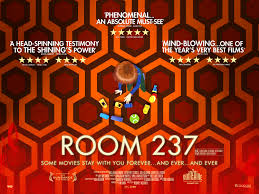 Room 237 - a documentary revolving around interpretations of The Shining - represents some of the best elements of film criticism. The commentators each have a great eye for detail and care passionately about the film. However, their fanatical discussions simultaneously risk giving film theory a bad name, not because of their interpretations, but because of the tone the contributors share. The commentators place too much weight on intentionality, presenting their personal responses to the film as objective fact. For example, opinions are couched in phrases such as ‘what is REALLY going on’, ‘so it IS a minotaur’, and ‘I wasn’t sure at first...but then I knew’. Where the commentators instead place weight on Kubrick’s intentions, they do so in a similarly overwrought fashion. For some of the contributors, Kubrick is ‘thinking about the whole of existence’ in The Shining. Elsewhere, Kubrick is presented as ‘a megabrain for the planet’. The emphasis on Kubrick’s vision is ironic given that The Shining was commonly regarded as a failure on its release precisely because of Kubrick’s reputation as an auteur.
These notable, prevalent flaws damage Room 237 . Throughout, I cwas haunted by the dreaded phrase “reading too much into it”, which is one of my pet hates. Although it sounds like a criticsim aimed at the interpretation, the phrase "reading too much into it" is indicative not of illegitimate ideas, but rather inadequate substantiation. Indeed, there are more direct explanations for some of the interpretations offered. The Shining’s visual aesthetic is built around symmetrical compositions and shape matches. The continuity inconsistencies and geographical mismatches boasted by The Shining add to its labyrinthine qualities, which tarry with the script's references to mazes. The aesthetic has a thematic unity that does not require outlandish theorisation, then: rather, The Shining explains itself.
Consequently, some of the contributions come across as bizarre, especially where they are ill-explained. A missing chair is said to be a parody of horror conventions, but it is unclear how the two elements interconnect. One commentator asserts that only words that can be made out of ‘Room No 237’ are ‘moon’and ‘room’, leading to discussion of Room 237 as the ‘moon room’. The point falls flat, not least because the word ‘moron’ can be made out of the same letters.
On a more positive note, the film presents the more outlandish assertions in an ambivalent manner. In some cases, the readings are supported. For instance, one of the chapters is entitled “how the movie was meant to be seen”, which validates the contributors' assuredness in their responses. Furthermore, many of the clips from The Shining “confirm” and anchor the commentators' voice-overs. On other occasions, the footage is used to dispel the commentator’s propositions with visual evidence to the contrary. Even more intriguing are the moments in which clips are left hanging, goading Room 237's viewer into entering the game, searching for meaning.
None of this is to suggest that Room 237 is a dull film. In fact, the commentator’s fish stories, dashes of brilliance, and flashes of near lunacy are both intriguing and entertaining. Although it is unlikely to change one’s view of The Shining, it may encourage many to revisit Kubrick’s excursion into horror.
Posted by Dr Steve Jones at 13:32