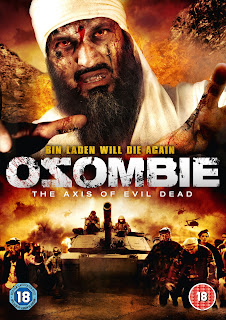 Bin Laden comes back from the dead to continue his regime of terror. Sounds gratuitously offensive on paper. In practice, Osombie is focused on congratulating American intervention in the Middle East more than it is on xenophobia. It is still plenty xenophobic enough for me, but the film fails to be any more shocking than its contentious premise. Maybe we should all be thankful that this film is just plain dull - at least it is not the taboo-flouting check-list that it could have been..
Posted by Dr Steve Jones at 10:30