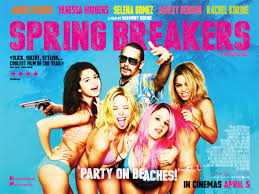 Harmony Korine's Spring Breakers looks great, but comes across as vacuous. However, that is also the point. The opening sequence - which emulates the aesthetic of glossy music promos - is such a jarring shift from the Korine of Gummo, Julien Donkey Boy and Trash Humpers that the intention is apparent. The movie's nubile teens are out for fun... at any cost, consequences be damned. I will not say much more about their descent (to do so would be to spoil the film). What matters is that the protagonists' myopic outlook is mirrored in the film form: the movie is "pretty" on the surface, but lacks substance (character development, narrative meat). The only character I really cared about leaves before the party really gets started, and the plot unravels until it becomes so fantastically clichéd and vapid it is only matched by the "ideal" spring break stereotypes that open the film. Casting Disney Princesses Gomez and Hudgens is a smart move, as was having the cast sing two Britney Spears songs. These details anchor the already present themes: (a) growing up too quickly in an image-saturated culture, and (b) the difficulties of bridging between childhood and sexual maturity.

Unfortunately for Korine, these clever ploys backfire somewhat. Because Spring Breakers'  subtext takes over the form and the story, its themes are not developed fully: they feel shallow. Moreover, since the characters and plot are so depthless, the film comes across as only being "about" its ghostly connotations rather than being about the story onscreen: the denoted is demoted. Ultimately, Spring Breakers is not a bad piece of filmmaking, but it is a frustrating film.
Posted by Dr Steve Jones at 12:05