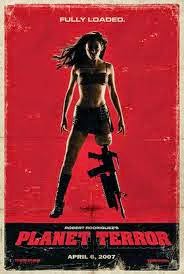 Over the last couple of years, trends have emerged among moderate-to-low budget, violent, exploitation-influenced horror: an area previously monopolized by torture porn. Tarantino/Rodriguez’s Grindhouse project (2007) – the double-feature Death Proof and Planet Terror, both of which were dubbed “torture porn” – has spawned a host of neo-grindhouse movies that overtly flag their relationships to their generic forbearers. Machete (2010) and Hobo with a Shotgun (2011), for instance, are feature films based on Grindhouse’s mock film-trailer segments, and follow Grindhouse’s attempt to replicate 1970s/80s exploitation’s formal aesthetics. These films nostalgically replicate formal properties arising accidentally from their forbearers’ limited budgets and cheap film stock. Original grindhouse films were largely rejected as cultural trash. The film reels that contained these artefacts were thus neglected. The cultural status of grindhouse cinema manifested in physical properties such as scratched negatives and missing reels. These physical properties have become synonymous with exploitation films of the 1970s. Physical flaws manifest their cultural denigration, but that derogation equally inspires fan ownership over these neglected texts. Grindhouse co-opts those aesthetics, nostalgically remembering what original grindhouse films signified from an audience perspective. Grindhouse’s ‘missing reel’ sequence – in which the film’s sex sequence is glossed over by a caption reading ‘sorry for the inconvenience: theatre management’ – is one such example. Digital technology is used to purposefully replicate the original films’ faults, despite Grindhouse’s inflated budget ($53 million (IMDB.com)), and digital filmmaking’s propensity to overcome those technical, analogue issues.

Other neo-grindhouse films such as If a Tree Falls (2010), Run, Bitch Run! (2009) and No Moriere Sola (2008) have followed suit. Grainy, yellow-tinged footage and distorted synth music accompany rape-revenge plots. Thematically and aesthetically, these films feel like they have been dredged from a cultural mire. In these cases, and in contrast to Saw’s glossy contemporary look, the films embrace what grindhouse represented in budgetary terms, using nostalgic homage to excuse their own budgetary restrictions. For those of us who have fond memories of video shops rather than seedy Soho cinemas, there is Grindhouse’s direct descendant Hobo with a Shotgun, which is focused on 1980s rather than 1970s exploitation aesthetics. Despite referring to contemporary phenomena such as Bumfights (2002), Hobo with a Shotgun’s exaggerated fashion (the villainous brothers’ sunglasses and jock-jackets) and lighting (saturated, primary-colours) are reminiscent to films such as Savage Streets (1984), for instance. The presence of aging action-star Rutger Hauer, and the film’s end-credit theme – Lisa Loucheed’s “Run with Us”, which was written for the 1985 animated series The Racoons – further illustrate the extent to which 1980s nostalgia pervades Hobo. Although nothing will ever replace the unalloyed joy I feel whenever I see the opening sequence of Friday the 13th VI: Jason Lives (1986) or whenever I encounter the original VHS cover of Spookies (1986), there is something comforting in knowing that Eisner evidently shares some of that fondness.

The comparison between torture porn and neo-grindhouse throws the contextual issue into relief, then. Torture porn’s multiplex success marked the subgenre as distinctly different to grindhouse movies, since “grindhouse” refers to a specific locale: independent cinemas specialising in porn and exploitation film exhibition. The grindhouse was eventually replaced by the home-video market. This disparity between the idea of “grindhouse” exploitation and the multiplex success of Tarantino’s films is perhaps one of the reasons Grindhouse flopped at the box-office, and has found greater success on DVD (see Benson-Allott, 2008: 24). Neo-grindhouse befits its DVD ghettoization. The success of neo-grindhouse film on DVD parallels a renewed interest in 1970s and 1980s horror films in the same market. DVD labels such as Arrow and Shameless have recently re-released uncut versions of exploitation films such as Killer Nun (1978) and Night Train Murders (1976) that were previously banned in the UK. Since 2005, Nucleus Films have released three volumes of Grindhouse Trailer Classics and Synapse Films have release six DVD volumes of grindhouse film trailers in their 42nd Street Forever series. 42nd Street refers to a locale in Manhattan famed for being exploitation cinema’s epicenter. The title 42nd Street Forever aptly connotes that DVD has taken over that mantle.