On the  Virtues of Pseudo-Plotting 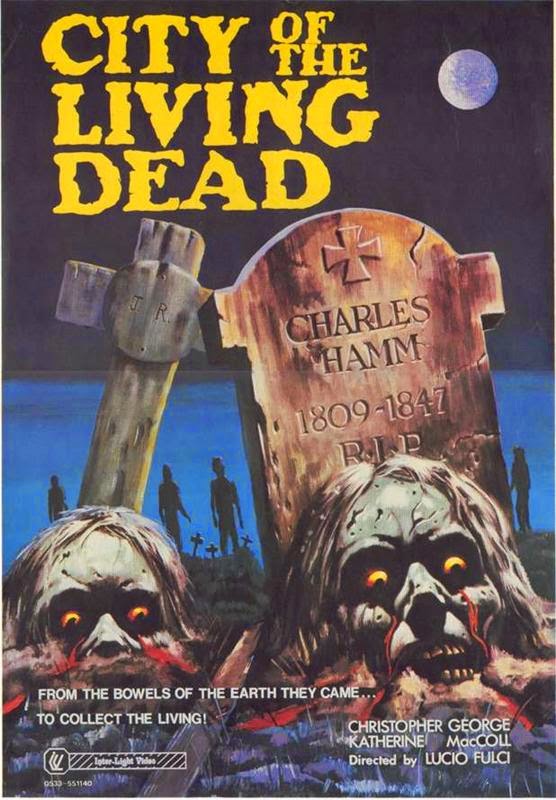 That is not to say that narratives have to spoon-feed the viewer. Labouring the plot can kill a film. Expository speeches such as Lance Hendrikson’s in Hellraiser: Hellworld (2005) or Sarah Michelle Gellar’s in The Grudge (2004) are inexcusably clumsy and outright patronising, for example.

Unnecessary digs aside, the phenomenon I am here to address pseudo-plotting. Consider City of the Living Dead (1980), by way of illustration. One of the reasons I enjoy the film so much is that its narrative is an elaborate con. At any point during the run-time, the movie appears to have a perfectly normal, logic narrative structure. When the end credits roll, I realise how little sense the events made. I can only liken the experience of watching City of the Living Dead to having a conversation with someone, then five minutes later realising that they’ve picked my pocket.

Strange things happen throughout City of the Living Dead. A window gusts open, spraying maggots over the protagonists. A dead priest appears and a young woman vomits out her intestines. Mere hours before the gates of Hell are about to open, one of the only people in a position to prevent the oncoming apocalypse suggests that they should stop for lunch because she is peckish. None of the film’s events are singularly enough to derail the film. In fact, they add to City of the Living Dead‘s general atmosphere of supernatural uneasiness. Anything could happen, and sometimes anything does happen.

Each part obfuscates the whole that those elements combine to create. The whole remains ungraspable. In the final shot, what should be a happy ending is consumed by a shrill scream, and the shot shatters. It is at this point that Fulci ultimately pulls the rug.

The expectations that typically shape our interpretations are denuded, exposed as falsities. City of the Living Dead does not abandon narrative, but rather continually makes narrativisation strange, throwing into relief how much we habitually rely on those conventions.

[BOOM - eat that Wes Craven. Deconstruction? ... so 1980]
In fact, Fulci continually adopts unexpected camera angles and techniques. His penchant for crash-zooms notwithstanding, the séance sequence’s pivoting extreme close-ups establish his unnerving formal agenda from the outset.

Fulci didn’t always balance those elements so successfully. The Beyond (1981) moves too far towards unhinged incidents, while The House by the Cemetery (1981) opts for fairly standard plotting without enough oddity for my tastes. City of the Living Dead was Fulci’s opus, at least with regard to pseudo-plotting. Very few films manage to capture the balance that he achieved in this film, which is too frequently dismissed as splatter nonsense.
Posted by Dr Steve Jones at 04:29